Use of this site indicates acceptance of the Privacy Policy and Terms of Use.
The information on this Website is not reliable and not intended to provide tax, legal, or investment advice. Nothing contained on the Website shall be considered a recommendation, solicitation, or offer to buy or sell a security to any person in any jurisdiction.
CEO.CA members discuss high-risk penny stocks which can lose their entire value. Only risk what you can afford to lose.
© 2021 - CEO.CA Technologies Ltd.
@accesswire/murchison-minerals-commences-inaugural-drill-program ↻
0 online
Today This week
Search Subscribe
Members of @accesswire/murchison-minerals-commences-inaugural-drill-program

BURLINGTON, ON / ACCESSWIRE / November 2, 2021 / Murchison Minerals Ltd. ("Murchison" or the "Company") (TSXV:MUR) is pleased to announce that it has commenced drilling at its 100%-owned HPM (Haut-Plateau de la Manicouagan) project located in Quebec. The proposed drill program is designed to test the subsurface continuation of the significant nickel-copper-cobalt surface mineralization discovered at the PYC target (see Aug 16th, 2021 news release). Murchison is eager to complete the helicopter-supported drill program as the Company strongly feels that the results of the program will clearly demonstrate the large nickel-copper-cobalt tonnage potential of the project.

Murchison is completing simultaneous prospecting of a number of significant geophysical anomalies that were identified on the project in the recently completed 655 line-kilometre airborne electromagnetic survey (see June 03, 2021 news release). While the program has just commenced the field teams have already successfully located significant additional surface sulphide at the Syrah target. The crews have now mapped sulphide mineralization over a strike length of approximately 370 metres (Map 2) and early analysis of the sulphide mineralization using a handheld XRF indicates the presence of nickel-copper-cobalt mineralization and assays are pending. The Syrah target is considered highly prospective as it is located approximately 350 metres away from the Barre De Fer prospect with a similar geophysical signature. Previous drilling at Barre De Fer in 2008 and 2009 intersected up to 43.15 metres grading 1.74% Ni, 0.90% Cu and 904 ppm Co (Hole HPM-08-03).

"We are very excited to commence the inaugural drill program at HPM, that is designed to unlock the potential of the highly-prospective nickel-copper-cobalt mineralization at PYC. The PYC target has significant strike length paired with observed surface mineralization returning surface grades as high as 1.28% NiEq from the summer sampling. The work done to-date by Murchison's technical team provides confidence that the inaugural drill program will deliver strong drill results. In addition to the drill program, prospecting by the technical team continues to successfully locate and expand additional high-priority nickel-copper-cobalt prospects at HPM."

The 2021 fall HPM drill campaign consists of one helicopter-supported drill supplied by Logan Drilling Limited with the work crews based at the nearby Station Uapishka. The program is focused on testing the subsurface of the PYC mineralized body that assayed as high as 1.28% NiEq or 0.79% Ni, 0.14% Cu, and 0.15% Co from grab samples collected during the spring 2021 prospecting program. The surface mineralization at PYC has been observed on surface over a strike length of 1.7 km with potential 1.95 km or greater strike length indicated by recent electromagnetic airborne geophysics. The mineralization on surface has been systemically sampled to confirm a 42 metre-width in two parallel lens (28 metres- and 14 metres-wide) that were separated by ~30 metres of unmineralized gabbro in one location.

Geophysical modelling of the PYC target from the 2021 airborne electromagnetic geophysical data has produced maxwell plate models that approximate the sulphide mineralization and extend to a depth of 300 metres (potential depth limit of the modelling for a vertical conductor). The planned drill holes are designed to test the geophysical modelling. 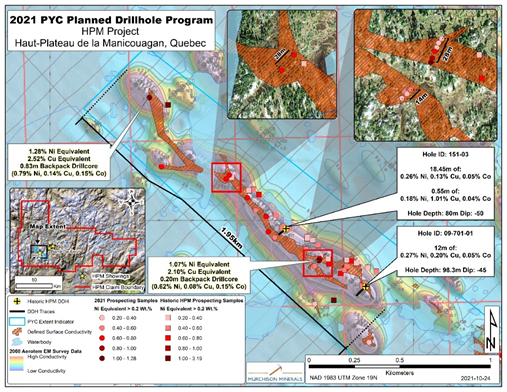 The prospecting will be utilizing Murchison's successful technique of identifying airborne geophysical anomalies on surface using "beep mat" technology. The beep mat is a small plastic sleigh that is pulled behind a prospector that emits an audible beep anytime the sleigh is passed over any electromagnetically conductive material. The beep mat can detect buried conductive material up to a potential depth of five (5) metres. Once an anomaly is located it is then exposed using shovels and picks to reach the source outcrop. The outcrop is then sampled using a small back drill that cores the outcrop up to a metre deep.

The April 2021 airborne geophysical survey located a substantial number of geophysical anomalies with the majority completely unexplored. The prospecting program will focus on determining the source of these anomalies. 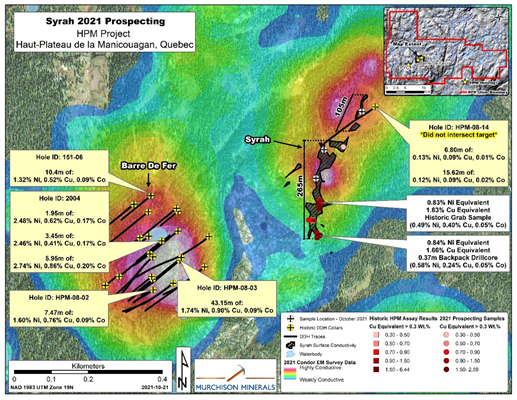 Murchison has now received all assays from the June 2021 two-hole drill program designed to test a borehole electromagnetic geophysical anomaly located during the winter of 2021 at the Betty Target, about 1 km northeast of the Brabant-McKenzie Deposit. Of the two holes drilled, hole BZ21-004 successfully intersected VMS-style sphalerite mineralization that assayed 1.93% ZnEq over 2.70 metres including 3.88% ZnEq over 0.66 metres. The mineralization encountered is considered prospective and requires follow-up drilling along strike to fully test VMS mineralization potential.

The foregoing scientific and technical disclosures on the HPM project have been reviewed by John Shmyr, P.Geo., VP Exploration, a registered member of the Professional Engineers and Geoscientists of Saskatchewan and current holder of a special authorization with the Ordre des Géologues du Québec. Mr. Shmyr is a Qualified Person as defined by National Instrument 43-101.

About the HPM Project

The project is within the Haut-Plateau de la Manicouagan area. The claims host prospective gabbroic, ultramafic and anorthositic bodies within the Manicouagan metamorphic complex and are associated with significant nickel-copper-cobalt mineralization identified by a total of 32 diamond drill holes (6,479 m) completed in 2001-2 and 2008-9.

The majority of the past drilling at HPM targeted the Barre de Fer geophysical conductor and confirmed the known nickel-copper-cobalt mineralization approximately 300 metres along strike and to a depth of about 280 metres. The mineralization remains open at depth and partially along strike.

The Brabant-McKenzie project is located 175 kilometres northeast of La Ronge, Saskatchewan and approximately three kilometres from the community of Brabant Lake. The area is accessed year-round via provincial Highway 102 and is serviced by grid power. The project consists of one mining lease, which hosts the Brabant-McKenzie VMS deposit, and additional mineral claims totalling 629 square-kilometres, that cover approximately 57 kilometres of strike length over favourable geological horizons, multiple known mineralized showings and identified geophysical conductors.

Murchison is a Canadian‐based exploration company focused on nickel-copper-cobalt exploration at the 100%-owned HPM project in Quebec and the exploration and development of the100%-owned Brabant Lake zinc‐copper‐silver project in north‐central Saskatchewan. The Company also holds an option to earn 100% interest in the Barraute VMS exploration project also located in Quebec, north of Val d'Or. Murchison currently has 153.2 million shares issued and outstanding.

Additional information about Murchison and its exploration projects can be found on the Company's website at www.murchisonminerals.com. For further information, please contact: