Use of this site indicates acceptance of the Privacy Policy and Terms of Use.
The information on this Website is not reliable and not intended to provide tax, legal, or investment advice. Nothing contained on the Website shall be considered a recommendation, solicitation, or offer to buy or sell a security to any person in any jurisdiction.
CEO.CA members discuss high-risk penny stocks which can lose their entire value. Only risk what you can afford to lose.
© 2016 - Pacific Website Company Inc.
@newsfile/meridian-mining-signs-cabaal-purchase-agreement ↻
0 online
Today This week
Search Subscribe
Members of @newsfile/meridian-mining-signs-cabaal-purchase-agreement

London, United Kingdom--(Newsfile Corp. - November 9, 2020) - Meridian Mining SE (TSXV: MNO) ("Meridian" or the "Company") today announces that it has signed the binding Purchase Agreement with the Vendors of the Cabaçal Copper Gold Project ("Cabaçal") in the state of Mato Grosso, Brazil (Figure 1) on the terms as outlined in the Option Agreement originally announced on August 26, 2020[1]. The acquisition of Cabaçal represents a key addition to Meridian's portfolio of projects. Cabaçal is a district-scale Copper (Cu) Gold (Au) endowed Volcanogenic Massive Sulphide ("VMS") project with extensive near-mine and regional exploration upside. The filing of the mineral rights transfer with Agência Nacional de Mineração ("ANM") will now proceed, following which Meridian will make the payment of US$275,000 scheduled under the definitive Purchase Agreement (totalling payments of US$300,000 towards the aggregate purchase price of US$8,750,000).

Highlights of the Cabaçal Project:

Dr Adrian McArthur, CEO & President, states, "With the completion of the due diligence program and signing the Cabaçal Purchase Agreement, Meridian has secured a significant Cu-Au (+Ag-Zn-Pb) VMS district that hosts a large and open near surface Cu-Au historic resource* and many highly prospective adjacent anomalies. Cabaçal presents an opportunity to continue building a future mid-tier mining house. We see similarities to the early days of Hudbay as it set out to develop the Flin Flon VMS mining camp in Manitoba in 1927. To secure the untapped value potential presented by the Cabaçal district scale VMS project for our investors and bring it onto the TSX Venture Exchange is an event rarely seen. Our intention is to develop Cabaçal in an environmentally sustainable manner using best practices and engaging with local stakeholders to build our social license to operate."

BP Minerals first identified the Cabaçal project with the discovery of a new greenstone belt during their 1980's gold exploration campaigns. Cabaçal was historically developed as an underground mine, focussed selectively on high-grade gold and copper veins. Geological models in the early stages of mine development favoured structural controls on mineralization. Later independent studies by Canadian specialists in 1990 concluded that the belt hosted significant centres of hydrothermal activity and mineralization characteristic of VMS systems (including Cabaçal itself)[3]. The mine was acquired by Rio Tinto as part of the 1989 takeover of BP Minerals before closing in 1991 as a non-core asset during a period of subdued metal prices. However, extensive lenses of Cu-Au (+Ag-Zn-Pb) VMS mineralisation defined by the historical works of BP Minerals and Rio Tinto (over 400 diamond drill holes ("DDH")) remained unmined. Regional historical exploration programs defined numerous geochemical and geophysical VMS style anomalies. Exploration drilling 475 m northeast of the Cabaçal Au-Cu mine, returned an intersection in DDH JUSPD216 of 1.95 m @ 390.0 g/t Au, 0.4 % Cu from 27.5 m down hole (true width not reported) within a broader alteration halo. 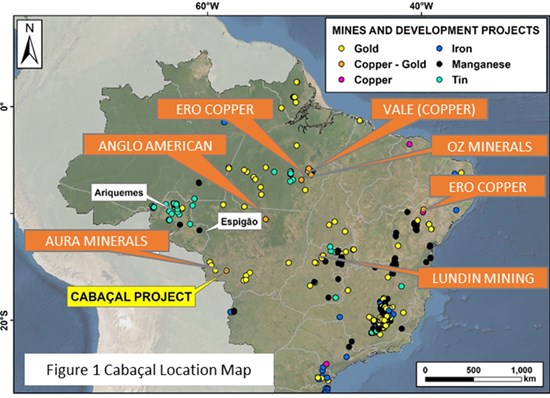 Figure 1: Location of the Cabaçal project in relation to other significant Cu-Au mines and exploration and development projects.

A modern 2007 heliborne electromagnetic ("EM") survey has defined extensive EM plates, supplementing the earlier generation of defined geophysical & geochemical targets (Figure 2). The Santa Helena polymetallic mine 11km south of the Cabaçal mine, was partially mined by the vendors until 2007 and forms part of the regional endowment4. The near-mine and regional targets are yet to benefit from the application of modern advances in geochemical exploration methods and surface and down-hole geophysical techniques that have contributed to discoveries in VMS camps elsewhere. 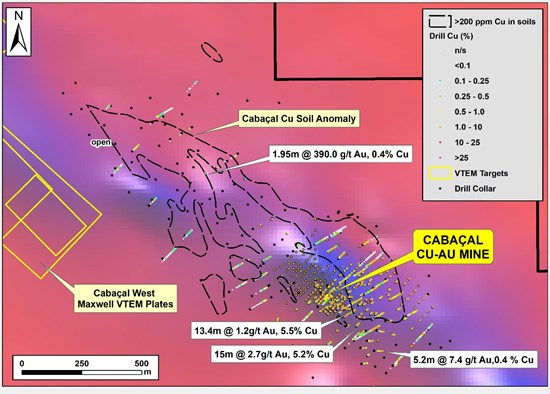 Figure 2 Cabaçal drilling with examples of historical drill results outside the limits of mine development. VTEM db/dt conductivity image in the background with blue representing more conductive zones.

The Cabaçal VMS district has many similarities to other VMS districts such as Flin Flon (Manitoba) Matagami (Quebec) among others (Figure 3). Unlike these mature or near end-of-life mining camps, the Cabaçal VMS district is comparatively untouched by mining and regional exploration drilling and hosts significant near surface Cu-Au (+Ag-Zn-Pb) mineralisation. The defined regional prospects are ready for follow-up. Also, like comparable VMS camps, based on the historical production and in-house reviews, the Cabaçal Cu-Au (+Ag-Zn-Pb) mineralisation is amenable to standard metallurgical recovery techniques. 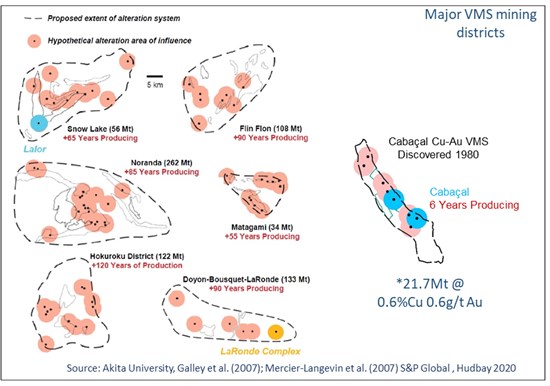 Figure 3: Cabaçal shown at the same scale to other analogue VMS Mining Districts.

A particular near-term objective will be to conduct verification and infill drilling on the Cu-Au VMS envelope defined by the historical drilling at Cabaçal. The undeveloped lenses of stringer stockwork and disseminated mineralization hosts an historical resource of 21.7 Mt @ 0.6 % Cu & 0.6 g/t Au*. Attractive targets also include the open down-plunge projection of high-grade trends to Cabaçal, and clusters of conductivity anomalies on strike within the mine corridor defined by the modern VTEM survey.

* Note: The historic resource was completed by Falcon and presented to the Vendors in a report dated 22 April 2009. The Company has not treated this resource as a current mineral resource for purposes of National Instrument 43-101. Readers are cautioned that the historic resource is not considered to be current for purposes of NI 43-101. The historical resource was estimated via an Inverse Square Distance method, using data from 301 diamond drill holes. A uniform density of 2.7 was applied for tonnage calculation, using 3D solids modelled from 54 sections. A 0.20% Cu Equivalent % cut off grade was applied (CuEquiv % = Cu % + (0.51 * Au ppm); Metallurgical Recovery = 85% Cu, 65% Au; Au price US$ 845 / oz; Cu price US$ 4000 / ton). Given the amount of historic exploration data on the Cabaçal project the Company considers the historic resource to be relevant to understand the mineral potential of the Cabaçal project. Historical resource numbers are rounded to 1 decimal place. A qualified person has not done sufficient work to classify the historical estimate as current mineral resources or mineral reserves. The issuer is not treating the historical estimate as current mineral resources or mineral reserves

The Company has prepared an extensive corporate program to advance the procedures and permitting required to conduct the future resource delineation and exploration programs at Cabaçal. The Company is also pleased to announce it has engaged Mr James McLucas of North 51 Mining Limited to aid in Meridian's corporate development.

Samples from Cabaçal drill core were historically analysed for gold by 50g Fire Assay with AAS finish, copper three acid digest and AA finish, and silver by Aqua Regia by AA finish at BP Mineral's laboratory in Bonsucesso (Rio de Janeiro, Brazil), supervised by Mauro Yamamoto. Samples were prepared at Caxias and the mine site itself. Half-core was dried, crushed to a quarter inch size through a jaw crusher, pulverised to 150 mesh in a ring mill, passed through a Jones Splitter to produce a 100-200g split, with one sample archived for reference and the other dispatched for analysis. BP Mineral's quality control program included duplicate analyses, and periodic checks using independent laboratories. Holes were surveyed by theodolite referenced to a local base station by qualified surveyors. Hole 216 was drilled by a Maque 124 diamond rig with HQ core size. Analytical results are variably recorded in prints of BP Mineral's VAX database records of the time and reports of the era. An objective of Meridian's initial drill program is to conduct a series of twin drill holes to a modern QA/QC program through a certified independent laboratory to test the repeatability of historical results.

On behalf of the Board of Directors of Meridian Mining SE

Meridian Mining SE is focused on the acquisition, exploration, and development activities in Brazil. The Company is currently focused on developing the Cabaçal VMS Cu-Au project in the state of Mato Grosso; exploring the Espigão Cu-Au polymetallic project, the Mirante-da-Serra manganese project, and the Ariquemes tin portfolio in the State of Rondonia Brazil.

Further information can be found at www.meridianmining.co.

The Company cautions that it has not completed any feasibility studies on any of its mineral properties, and no mineral reserve estimate or mineral resource estimate has been established.

To view the source version of this press release, please visit https://www.newsfilecorp.com/release/67790