Use of this site indicates acceptance of the Privacy Policy and Terms of Use.
The information on this Website is not reliable and not intended to provide tax, legal, or investment advice. Nothing contained on the Website shall be considered a recommendation, solicitation, or offer to buy or sell a security to any person in any jurisdiction.
CEO.CA members discuss high-risk penny stocks which can lose their entire value. Only risk what you can afford to lose.
© 2016 - Pacific Website Company Inc.
@newswire/meridian-announces-strong-em-conductors-and-expanded ↻
0 online
Today This week
Search Subscribe
Members of @newswire/meridian-announces-strong-em-conductors-and-expanded

/NOT FOR DISTRIBUTION TO U.S. NEWS WIRE SERVICES OR FOR DISSEMINATION IN THE U.S./

The Company's surface EM survey detected a strong bedrock conductor at Cabaçal South, centred ~400m south of the historic mine (Figure 2), with a conductivity consistent with a potentially massive-sulphide target. This program has also modelled a series of large shallow conductors extending out from the Cabaçal mine's copper -gold workings a further 200 m south east (Figure 2).

The Company is pleased to announce it has secured at the southern limit of the Project's VMS belt, increasing the tenure from 185 km² to 283 km². The new license has an existing copper-geochemical anomaly. Separately, after reviewing the historical 1980's BP Minerals regional exploration reports, the Company has secured a strong land position of 484 km2 located 20km west of the Project (Figure 3). These new licenses are within two separate greenstone belts, where the historical reports highlighted their Cu-Au-Ni exploration potential.

Dr Adrian McArthur, CEO and President comments: "The recognition of both surface and bore hole conductors over the Cabaçal mine area and their extensions southwards is consistent with records that significant copper and lower grade gold mineralization was not mined due to the high gold cut-off grade of 3g/t that was used. Defining Cabaçal's surface EM response now allows us to revisit the modern belt-scale airborne EM data and look for analogue responses that were not selected in the original review; this has opened up a whole new set of parameters for detecting shallow Cabaçal copper-gold type targets along the belt. Cabaçal South's bedrock conductor is very typical of conductors found in the worlds VMS camps and we look forward to testing this later in the current program.

The securing of the southern extent of the Cabaçal belt trend was an important long term goal of the Company and firmly establishes the Company as the dominate land holder of the prospective ground. Our move into the adjoining Jaurú & Araputanga Greenstone belts, based on prioritised targets defined by BP Minerals in the 1980's is significant. To have immediately secure 484 km² of licenses within two separate greenstone belts with prospective geology for copper, gold and nickel is something no company could have achieved in similar jurisdictions like Canada or Australia."

The BHEM survey from CD-001 has outline a significant conductor within the SCZ trending to the south east. The conductor extends into and below the old workings and is considered open southwards (as a function of the effective search radius of available equipment). The surface program has defined several early channel conductive plates that extends out from the old workings and southwards past the BHEM conductor, and the Company is interpreting these as extensions of the known stringer and breccia sulphide mineralisation. 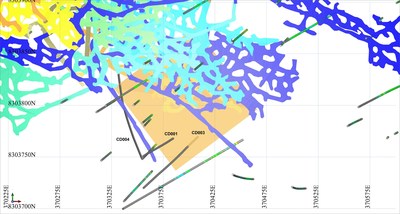 Following the successful results of the first EM surveys (downhole and surface) for defining mineralisation and prospective drill targets despite older generation technology. So, to ensure that the maximum ability to detect potential sulphide mineralisation within the Project is achieved, the Company has decided to purchase a set modern and more powerful EM surface and BHEM tools. This will give the Company the maximum ability to chase the known anomalies down dip and along strike, with the next major EM surface survey planned for mid-summer; borehole surveys are continuing. This equipment will equally be used in the expansion of surface EM exploration along the Cabaçal belt, an exploration technique hugely successful in detecting Cu deposits in other VMS belts. The historical copper-geochemical anomaly defined by BP at the southern limit of the Cabaçal belt was an important area that the Company wanted to secure. The presence of the established Cu anomaly prioritised this license, in conjunction with review of the regional geophysics which suggested an extension of the VMS belt stratigraphy beyond the interpreted limits in regional-scale maps.

The 484 km² of new licenses in the Jaurú & Araputanga Greenstone belts is part of the long-term development and planning of the Company with its focus on copper and gold. The advanced "greenfields" exploration results and reports produced by BP in the 1980's generated interest within the Company to secure a significant land position in these two undeveloped greenstone belts. The same greenfields exploration activity by BP in the 1980's led to the discovery of the Cabaçal Cu-Au and the Santa Helena Zinc (+Cu-Au-Ag-Pb) mines and many other anomalies, and the Company appraisal is that its licenses in the Jaurú & Araputanga Greenstone belts have strong potential to repeat the discovery success in the Cabaçal belt. 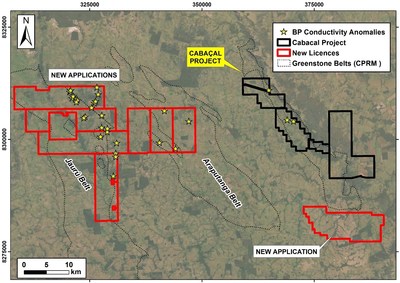 Further information can be found at www.meridianmining.co

Reginal electromagnetic targets were defined by an historical INPUT Survey carried out in September 1982 by Prospec S / A, with the technical supervision of Questor Canada. Questor / Barringer Mark VI INPUT System equipment and a Geometrics G-803 proton magnetometer were used, mounted on a Trislander type aircraft. Data were collected in analog and digital records, along flight lines spaced approximately 500 meters apart, orthogonal to regional structures. The average flight height was around 130 meters, with the INPUT receiving coil conducted about 70 meters below the aircraft. The analog register had 6 INPUT channels, magnetometry on two scales, radio altimeter and 60 Hz monitor.  Geophysical targets are preliminary in nature and not conclusive evidence of the likelihood of a mineral deposit. Regional geochemical anomalies were defined by a stream sediment sampling program, with samples analysed for Cu, Pb, Zn, Ni, As. Recent Fixed loop orientation electromagnetic surveys over Cabacal have been conducted by Geomag S/A Prospecções Geofísicas, a company of the Wellfield Services Group, using a TEM57-MK2 Transmitter and PROTEM receiver for surface surveys and BH43-3 borehole three-dimensional time domain (TDEM) probe for subsurface work. Quality control is performed daily by the geophysical representative of the Wellfield Group, before and data sent to the Company's independent consultant, Core Geophysics. Modelling of conductivity responses is undertaken using industry-standard Maxwell software.

Meridian Mining UK S is focused on the acquisition, exploration and development activities in Brazil. The Company is currently focused on resource development of the Cabaçal VMS Copper-Gold project, exploration in the Jaurú & Araputanga Greenstone belts located in the state of Mato Grosso; exploring the Espigão polymetallic project and the Mirante da Serra manganese project in the State of Rondônia Brazil.