ⓘ
• Turn off ads with a Pro subscription
• Advertise on CEO.CA

Use of this site indicates acceptance of the Privacy Policy and Terms of Use.
The information on this Website is not reliable and not intended to provide tax, legal, or investment advice. Nothing contained on the Website shall be considered a recommendation, solicitation, or offer to buy or sell a security to any person in any jurisdiction.
CEO.CA members discuss high-risk penny stocks which can lose their entire value. Only risk what you can afford to lose.
© 2022 - CEO.CA Technologies Ltd.
@newswire/meridian-increases-landbank-over-the-cabaal-copper-gold ↻
0 online
Today This week
Search Subscribe
Members of @newswire/meridian-increases-landbank-over-the-cabaal-copper-gold

by @newswire on 5 Jan 2022, 07:30
Meridian Increases Landbank Over the Cabaçal Copper-Gold Belt

Dr Adrian McArthur, CEO and President of Meridian, comments, "The Company is pleased to announce it has placed the winning bid on these three licences, consolidating Cabaçal's landbank of prospective copper-gold geology to the limits of the Cabaçal Cu-Au VMS Belt. The new licences provide continuity with an earlier application, the Southern extension, where a copper anomaly has been defined by BP Minerals ("BP") stream sediment sampling. The Company is particularly excited by the presence of multiple and coincident anomalies defined by the WorldView-3 alteration mapping, being adjacent to BP's historical geochemical and geophysical anomalies. The licences will be initially in the application stage, but the Company looks forward to executing regional programs in the future with formal approval by the ANM. With these new tenements, Meridian's landbank package covers almost the complete entirety of the highly prospective Cabaçal VMS copper-gold Belt, essentially an undeveloped metallogenic belt, and we are probably the only company developing such an advanced asset in the Junior market today."

Winning bids have been successfully placed for three new licences under the ANM's auction system (Figure 1):

Area 1: The licence area covers the north-western-most limit of the Cabaçal Belt and formed part of the BP Minerals portfolio under licences 861921/1980 and 861921/1980. The southwest margin of the licence spans the "C5" soil geochemical BP target. The licence is poorly explored but drilling by Avanco in 2015 along strike (~ 460m to the Southeast of the licence boundary) encountered copper sulphide mineralization in hole AMCD-15-011 (peak grade of 2.4% Cu, 1.1g/t Au, 34.1 g/t Ag, 0.2% Zn over 0.5m from 48.8m, within a broader zone of hydrothermal alteration and disseminated mineralization). The northern licence spans an area of 1403.6 Ha.

Area 2: The second area to the south lies ~2.4km to the south of the Santa Helena Zn-Cu-Ag-Au Mine. The area spans the earlier BP licences 861937/1980, 861939/1980, 861958/1980 and a now excised segment of the Santa Helena mining licence 861956/1980. The eastern branch of the newly won area in the auction round incorporates BP untested target "C2D", where Cu, Zn and Pb soil anomalies were defined in association with hydrothermally altered metasedimentary – metavolcanic sequence. The western margin of the licence area hosts three conductors defined by BP's regional INPUT aerial survey, which originally defined the Cabaçal area as a geophysical target prior to discovery of the Cu-Au-Ag mineralization. The licence hosts multiple targets defined by the WorldView-3 satellite alteration mapping exercise, two of which are along strike from the C2D position, and the others offset to the east of the INPUT aerial conductivity anomalies. The licence spans an area of 5070.5 Ha.

Area 3: The third area to the Southeast lies ~9.5km along strike from the Santa Helena Zn-Cu-Ag-Au Mine. The area spans the earlier BP licences 861958/1980, 861959/1980, 867371/1983. The western margin of the licence hosts a gold in steam anomaly, and the new area covers a gap between the main licences of the Cabaçal Belt option area, and a prior satellite extension applied for by the Company - 866261/2021 –, Cabaçal's Southeastern-most known geology limit, where a BP copper in stream anomaly had been defined but not previously followed up. The licence hosts multiple targets defined by the WorldView-3 satellite alteration mapping exercise (20 discrete anomalies consistent with hydrothermal alteration signatures), including the large anomaly adjacent to the BP's copper-in-stream response on 866261/2021. The licence spans an area of 9466.5 Ha. 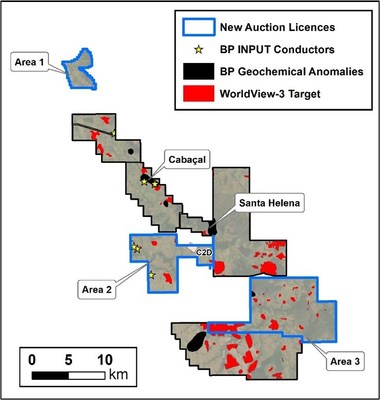 A number of procedural steps remain to ratify these new license applications, including an appeal process. Payments are due before 15 April 2022 before the results are formally published in the Diário Oficial da União. The Company's applications in the adjacent Araputanga and Jauru Belts followed the same process.

WorldView-3 is a high-resolution commercial satellite sensor launched in 2014 which provides detailed imagery that can be utilized in mineral mapping, providing a fast and effective technique to screen large areas for signatures of hydrothermal alteration. Data has been interpreted by Dan Taranik (Exploration Mapping Group, Nevada, United States).

The Company is encouraged by the local Cabaçal results of the survey, with the known mineralization from over the Cabaçal Mine and Northwest Extension showing an associated Worldview-3 satellite alteration anomaly extending over a 2,200m strike length.

Subject to final approval and authorization by the ANM, the licences will be integrated into the Company's regional exploration program, with a first phase of reconnaissance prospecting involving rock chip sampling and soil surveys. The immediate near-term drilling focus of the Company will continue to be in the near-mine areas hosting the Cabaçal and Santa Helena deposits, as targets are developed more regionally.

Qualified Person
Dr Adrian McArthur, B.Sc. Hons, PhD. FAusIMM., CEO and President of Meridian as well as a Qualified Person as defined by National Instrument 43-101, has supervised the preparation of the technical information in this news release.

Further information can be found at www.meridianmining.co

Meridian Mining UK S is focused on the acquisition, exploration, and development activities in Brazil. The Company is currently focused on resource development of the Cabaçal VMS Copper-Gold project, exploration in the Jaurú & Araputanga Greenstone Belts located in the state of Mato Grosso; exploring the Espigão polymetallic project and the Mirante da Serra manganese project in the State of Rondônia Brazil.

Some statements in this news release contain forward-looking information or forward-looking statements for the purposes of applicable securities laws. These statements include, among others, statements with respect to the Company's plans for exploration, development and exploitation of its properties and potential mineralization. These statements address future events and conditions and, as such, involve known and unknown risks, uncertainties, and other factors, which may cause the actual results, performance, or achievements to be materially different from any future results, performance or achievements expressed or implied by the statements. Such risk factors include, among others, failure to obtain regulatory approvals, failure to complete anticipated transactions, the timing and success of future exploration and development activities, exploration and development risks, title matters, inability to obtain any required third party consents, operating risks and hazards, metal prices, political and economic factors, competitive factors, general economic conditions, relationships with strategic partners, governmental regulation and supervision, seasonality, technological change, industry practices and one-time events. In making the forward-looking statements, the Company has applied several material assumptions including, but not limited to, the assumptions that: (1) the proposed exploration, development and exploitation of mineral projects will proceed as planned; (2) market fundamentals will result in sustained metals and minerals prices and (3) any additional financing needed will be available on reasonable terms. The Company expressly disclaims any intention or obligation to update or revise any forward-looking statements whether as a result of new information, future events or otherwise except as otherwise required by applicable securities legislation.